By Noman Naseer and Frank Hu 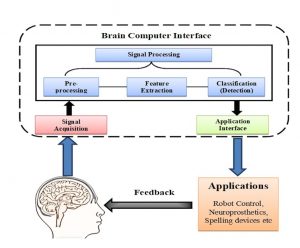 Brain-computer interface (BCI) is a system that allows control of computers or external devices using brain activity. Functional near-infrared spectroscopy (fNIRS) can be used to acquire brain signals for BCI. The detection of oxygenated and deoxygenated hemoglobin (HbO and HbR) using fNIRS was first demonstrated by Chance 1993, Villringer 1993, Hoshi 1993, and Kato 1993. However, the use of HbO and HbR for BCI was first proposed by Coyle 2004, who demonstrated the feasibility of a two-class BCI using signals from motor cortex. Since then, there has been substantial progress in fNIRS-based BCIs, with fNIRS now implemented in a range of BCI applications.

Communication:
A critical intervention is making communication possible for people with motor disorders such as ALS and LIS. Not surprisingly, this has become one of the primary aims of BCI. Naito 2007 and Naseer 2014 have developed fNIRS-based BCI for patients to communicate with “yes” or “no” responses.  These systems work by allowing subjects to perform a specific task, such as mental arithmetic or music imagery, to increase the cognitive load, thereby responding “yes” to a given question, or to remain relaxed, thereby responding “no.” A word-speller utilizing fNIRS-BCI together with motor imagery, in which brain activity moves a cursor on a two-dimensional screen to select letters, was outlined by Sitaram 2007. More recently, Chaudhary 2017 introduced a binary communication using a hybrid EEG-fNIRS system.

Motor Restoration:
Another important application of BCI is to restore movement in people with motor disabilities, which can be accomplished by controlling robotic arms/hands and wheelchairs. Misawa 2012 demonstrated the feasibility of controlling robot using fNIRS signals. Batula 2017 recently presented the results of a four-class motor-imagery-based system using fNIRS-BCI for robot control. Khan 2017 presented the control of a quadcopter using hybrid EEG-fNIRS system. Although direct control of wheelchair and robotic hands for paralyzed people using fNIRS remains to be reported, the concepts presented by Misawa 2012, Batula 2017, and Khan 2017 can be used to develop such systems.

Neurorehabilitation
BCI systems can also be used to restore motor and cognitive functions in people who have suffered from stroke or have spinal cord injuries. The underlying idea of neurorehabilitation is to use BCI feedback to induce regulation of brain activity (also called neurofeedback training). Mihara 2012 presented the possibility of using fNIRS-based neurofeedback to allow users to intentionally control their own hemodynamic responses. This team also demonstrated that fNIRS-based neurofeedback enhances the hemodynamic correlates corresponding to motor imagery. Mihara demonstrated the same concept in stroke patients in another study in 2013. In 2014, Kober 2014 revealed that fNIRS-based neurofeedback can be used for long-term training as well, with repetitive neurofeedback inducing specific and focused brain activation, while sham feedback led to diffuse activation patterns over a broader cortical region.

Neuroergonomics
Use of fNIRS in neuroergonomics has increased greatly in last 5 years. The primary issues in neuroergonomics are the assessment of mental workload and estimating mental condition in real-time. Ayaz 2012 used fNIRS to distinguish three levels of mental workload during an Air Traffic Control task. Derosiere 2014 presented the use of fNIRS for detection of attention lapse during cognitively demanding tasks. Gateau 2015 used fNIRS to estimate, in real time, the mental state of pilots in flight simulator, with mental states corresponding to high and low working memory loads. Khan 2015 used fNIRS to detect drowsiness in drivers during a driving task.

In the past decade, research in fNIRS-based BCI has been notably accelerated. This highlights the enormous potential of fNIRS-BCI applications due to portability, ease of use, and comparatively low cost.