fNIRS: an Application in Hearing Augmentation

By Heather Bortfeld and Luca Pollonini 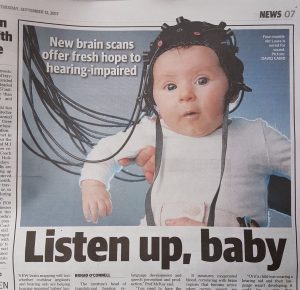 A feature story in the September 11th issue of The Herald Sun highlighted recent work at the Bionic Hearing Institute in Melbourne, Australia using fNIRS to evaluate hearing impaired children. The lead researcher of Bionic’s clinical hearing program, Colette McKay, says she aims to develop fNIRS as an objective measure of preverbal infants’ hearing status both with and without hearing intervention (e.g., hearing aids, cochlear implants). The goal of this application is to maximize children’s opportunity for normal language and brain development. Because early access to hearing is crucial for the development of cortical networks involved in language perception and production, early intervention treatments such as hearing aids and cochlear implants are critical. The problem is that infants and young children have no way of letting clinicians know what, if anything, they are hearing. This is where fNIRS comes in as a potential tool for identifying what, if any, hearing a young child has, and how his or her hearing intervention, whether via an aide or an implant, is providing critical auditory input.

In initial work in this domain, Heather Bortfeld (University of California, Merced) and John Oghalai (University of Southern California) were the first to assess cortical activation using fNIRS in cochlear implanted children. Further development by this group, in collaboration with Luca Pollonini (University of Houston), has focused on differentiation of cortical activation patterns in “good” and “poor” speech perception via cochlear implant as a model for what patterns of activation might look like in children. The UCM/USC/UH team is actively pursuing this issue in ongoing research with both pediatric and adult implant users.

Given the advances in the work from these and other research groups, it is an exciting time for the translational application of fNIRS in the domain of hearing augmentation.

Link to the story: