Boston University Neurophotonics Center hosted a one-day fNIRS symposium and reception this January (http://www.bu.edu/neurophotonics/2017/09/27/fnirs-symposium-2018/). Organized by David A. Boas, Juliette Selb -and me-, the symposium featured compelling application talks by experts in the field.

The symposium began with an entertaining and informative talk by David Boas in which he narrated us the life journey of fNIRS; how it grew from a baby into an adult and the successes and struggles it had during this journey. I took the mic next to talk about our work on obtaining an objective measure of pain during surgery, starting from the basic question of whether we can measure a robust pain related brain response from healthy adults to how we carried it to the clinic. Joy Hirsch, during the QA part mentioned the importance of adapting this to chronic pain and how it can have a high impact on legislation. Following a “pain”ful talk, we had the chance to listen Ioulia Kovelman’s talk on bilingualism and, as always, her talk was as lively as ever, engaging everyone in the audience. Moving on in the day, we had the chance to get the latest updates in developmental neuroscience and fNIRS global health applications from Katherine Perdue. Joy Hirsch – my yet another women-in-science role model- presented her recent cool work on fNIRS hyper-scanning, where she proved us how, by a careful experimental design, they have found the role of a specific brain region that has not been elicited by many years of fMRI work. Hasan Ayaz, carried the topic to the sky where they measured the brain activation of pilots during an actual flight. Their aim in this study is to estimate the working memory load during flight and how it affects a pilot’s performance. Final talk was given by Ted Huppert. Ted presented his work on multisensory integration in vestibular and gait disorders. I felt the interest and engagement lasted until the end of the event, and the panel sessions between the application talks played an important role in this. 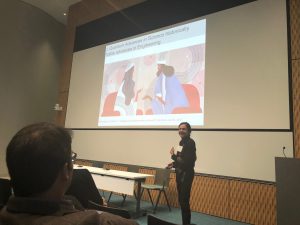 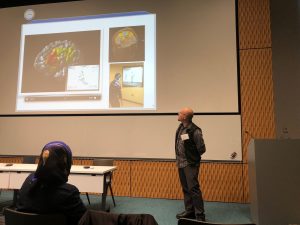 During the panel sessions, we had the chance to have fruitful discussion on various topics of interest which ranges from how to design a probe to how to manage an fNIRS facility. 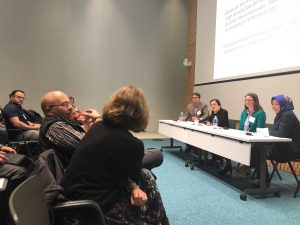 And last but not least, kudos goes to Juliette Selb, who was the key person in the realization of this symposium! 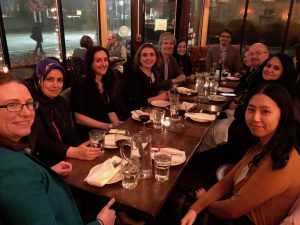