My art is inspired by the imagery and sentiment experienced through daily rituals and familiarities that are evoked within scientific academia, an attempt to bridge the disconnect between the spheres of art and science. The process of scientific discovery is expressed through the depiction of researchers in dynamic interaction to demystify science and to serve as a departure from the common portrayals of machines and test tubes. The characters are introduced into a semi-fictional moment created through my involvement with these people and the laboratory. As in science, where seemingly sporadic sets of data converge into the formulation of a singular hypothesis, the idiosyncratic, distinct characters are brought onto a singular large canvas to illustrate the disconnected yet collective learning process of science.

This idea is reinforced by the people sharing a nonsensical space, where each plane with separate depth and time is melded together. The mood is kept playful with vibrant colors and textures to immerse the viewers in the dizzying and entertaining room of creative minds. 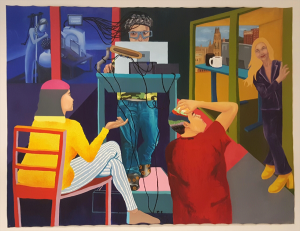 A day in the Hirsch fNIRS laboratory

Artist introduction:
Jenny Park is a first year medical student at Seoul National University and a recent graduate of Yale University. She was deeply involved in the neuroscience research at the Brain Function Lab as an undergraduate double majoring in Molecular Biochemistry and Art. Her painting participates in the effort to demystify science by introducing a playful mood into a relatively monotonous science scene.