By Felipe Orihuela-Espina in News on November 4, 2018.

The Tokyo biennial meeting of the society was a resounding success. It attracted more people than ever, and  from more countries. The quality of the presentations was outstanding, organization was impeccable, morning tutorials proved highly popular, poster discussions were lively, and exhibitor stands were full of the latest impressive developments. This post is a recap of some of the things that happened.

The conference was opened by  Martin Wolf who provided an overview of the three major challenges that remain in brain oxymetry with fNIRS: reconciling measurements across oximeters, obtaining absolute measurements, and removing contamination from systemic physiology. 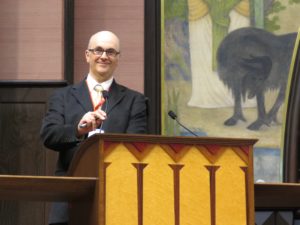 The first day opened with the morning tutorial on processing the signal, and continued with Arjun Yodh’s overview of diffuse correlation spectroscopy (DCS). The talk went from basic ideas and core physics on wave spectroscopy to how to use DCS for measuring blood flow, oxygen metabolism, and other parameters such as proxies of cerebral autoregulation. The rest of the first day included a session on hardware developments from which we learned about fast DCS, going higher to 1064nm for DCS, the virtues of broadband NIRS to measure cytochrome oxydase, high density systems with over 3000 channels, and bedside monitoring with supercontinuum lasers. After lunch, Fumitaka Homae presented his research on neurodevelopment. As a computer scientist, I was deeply impressed with the polished analytical approaches and their adaptation to different research questions. His talk was followed by a session on neurodevelopment. Topics covered included  the consolidation of memories and phonemic categories, cortical differences between monolingual and bilingual children, and a brilliant closing presentation on how prosody may be used to boost learning. The next session explored clinical topics and implications, including compensatory and inhibitory activities associated with executive function, as well as global NIRS issues. The latter included  differences in stimulus habituation between Gambia and UK populations and the development of a growth chart about brain maturation. The day closed with the talks from the Early Investigator Award finalists. 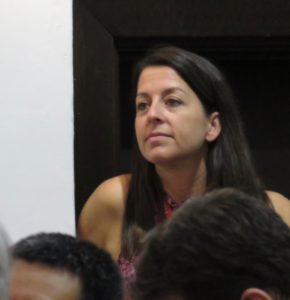 The second day of the conference was packed with good science. Felix delivered the early morning tutorial focusing on how to deal with systemic noise by concomitantly measuring other biosignals. Niels Birbaumer presented his groundbreaking work with BCIs to communicate with locked-in patients (an impressive feat in any sense, if I’m allowed). Subsequent presentations focused on monitoring and understanding medical conditions included presentations on cerebrovascular events associated to Down syndrome, chronic liver inflammation, stroke, and trauma. Allow me to pause for a moment on the session on data analysis (just because…).I almost had to remember to breath during the presentations on NeuroDOT and NIRSTORM. So many features and so much for the data analyst to learn! The analysis section was complemented by research on the use of wavelet coherence maps for the analysis of innovative hyperscanning applications,  as well as a thought provoking hypothesis about partial volume effects being responsible for inverse oxygenation recordings. Next was the panel on the origin of the signal; a brilliant discussion was guided by David Boas, Hellmuth Obrig, Yunjie Tong and Ilias Tachtsidis questioning what we are really measuring with fNIRS. In this session, we learned about the physiological responses to a stimulus, how we have to consider both cognitive and other related factors, the lessons learned from fMRI, how systemic contamination induces false positives (and how to alleviate them), among other things!. The evening saw the gala dinner in the fantastic National Museum of Nature and Science with the amazing TAIKO drumming. 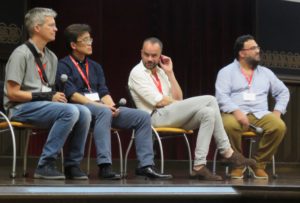 Finally, the third day started with some guidelines for fNIRS instrumentation standardization. The opening talk by Joy Hirsh focused on the rise of hyperscanning-based neuropsychology and was simply superb. She described fNIRS as being on the frontline to understand the holistic joint function of collaborative or competitive brains. The clinical applications session continued with talks on a study of the mirror neuron system (perhaps the first with fNIRS, and surely the first one that I’m aware of), with obvious implications for neurorehabilitation. This was followed by an eye-catching study on understanding brain response during mating, and presentations on neuropsychiatry on  autism and depression. The pediatric neuroscience session introduced us to some cerebral injuries that are the consequence of impaired bilirubin metabolism, validation of the Babylux TRS-DCS device with PET, the haemodynamic signature subsequent to processing of pain, as well as work on attentional (top-down) processes. This session closed with a study applying cytochrome oxydase to autism spectrum disorder. The last of the scientific sessions was dedicated to basic neuroscience. In this session, Haijing Niu gave us an overview of the modularity and nodal properties of the functional networks covering elements  of organization, complexity, and asymmetry. Another pleasure for the data analysts! The experimental setup used by Chiara in her study about the developing sense of self was very clever and imaginative. The session closed with developments in reproducibility of HD-DOT, an improved cranial cap for animal models that permits free movement for behavioural studies, and some theoretical work on reconstruction of fSCOT. The meeting ended with the society’s general meeting and some closing remarks by co-chairs Gentaro Taga and Turgut Durduran, and Lauren’s now famous cookie! 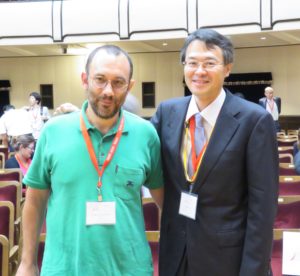 Of course, in addition there were the amazing  posters, some of which would have made outstanding talks. But the posters allowed for a more personal experience as you only have time to visit those most close to one’s research. For me, there was plenty, as data analysis proved to be a highly popular topic among the submissions and that fact was reflected in the poster content. I was expecting somehow an invasion of data driven machine learning approaches, and while there was some work in this direction, classical analytical approaches still dominated (which I quietly applaud!).

All in all, Tokyo was an unforgettable meeting, and we owe that to the effort of many people. I’m already raising my hand to attend and help with Boston 2020! 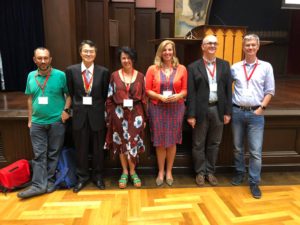