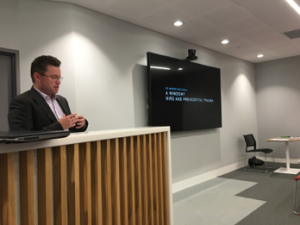 The first ever Australian NIRS meeting NIRStralia happened on 31 January 2018. The event was hosted by Dr Justin Skowno of The Children’s Hospital at Westmead, and was the first time that both NIRS clinicians and researchers will came together to share their knowledge and experiences of NRIS. There were 35 attendees from all over Australia with representation from the UK. The program focus was on the use of NIRS to monitor cerebral oxygenation in neonates and adults.

We were privileged to have world-renowned NIRS expert Professor Clare Elwell, Professor of Medical Physics and Director of the Near Infrared Spectroscopy Group, at University College London who enlightened us all on the Frontiers of NIRS and the ever evolving importance of Cytochrome Oxidase. Dr. David Highton also joined us from the Princess Alexandra Hospital in Brisbane and expanded on the information and knowledge we can glean from Cytochrome Oxidase and various measures of Cerebral Autoregulation.

Several local clinicians presented their own experiences and challenges with NIRS which  included Dr. Andrew Weatherill from the Children’s Hospital Westmead (CHW) who is pioneering NIRS as a window into the brain in the prehospital trauma setting, albeit sometimes a murky window! Drs. Pranav Jani and Himanshu Popat from Westmead NICU and the Grace NICU at CHW both shared with us their experiences with NIRS in the NICU. 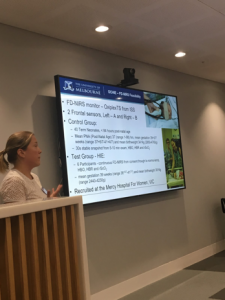 Dr. Justin Skowno shared with us the reassuring outcome from his recent research exploring cerebral perfusion during anesthetics in children that changes in systemic blood pressure during anesthesia rarely knocks on to a clinically significant reduction of cerebral oxygenation. Dani Forster from the University of Melbourne presented some preliminary results from her research exploring FD-NIRS as an indicator of HIE.

Vincent Gomes from the University of Sydney acquainted us all with the applications of quantum dots and their potential benefit in the diagnosis and therapy for breast cancer.

Last but not least, we heard from Roger Meder from the International Council for Near-Infrared Spectroscopy (ICNIRS) and the Australian NIRS Group (ANISG). Roger pointed out that NIRS has been used practically in non-medical industries for 35 years, and there are most likely lessons we can learn from each other! Roger everyone involved in NIRS  a very warm invitation to NIR2019 to be held on the Gold Coast in September 2019. 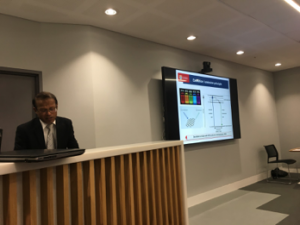 A massive thank you to Justin and Minal for organising NIRStralia and Congratulations for making it such a fantastic event!